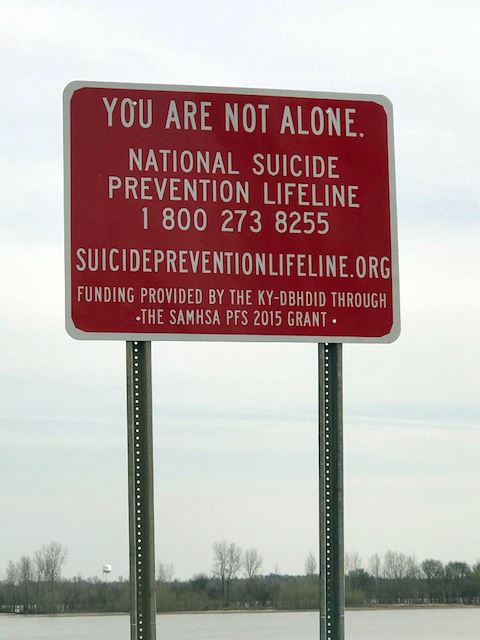 As of last week, signs have been installed at several bridges, including the Brookport Bridge and I-24 Bridge in Paducah, and the bridge over the Tennessee River at Ledbetter. Each sign says, “You Are Not Alone” and has the number and website for the National Suicide Prevention Lifeline. It is hoped that other regions in Kentucky will follow suit.

“We recently had two people within a few weeks of each other jump or attempt to jump off a highway bridge in our area. We just couldn't let that go. We wanted to do something.” Said Ellen Walsh, who is the program director for Four Rivers Behavioral Health’s Regional Prevention Center. “One of the most effective things we can do to help prevent suicide is let people know they aren't alone, that there is someone they can talk to.”

“It’s amazing how just a little thing like a sign can mean all the difference to someone contemplating suicide.” Said Samantha Powell, a certified prevention specialist at Four Rivers Behavioral Health’s Regional Prevention Center. “To know there is a call they can make and someone will listen is a very effective prevention tool. I have read research about the success of signs like this from the QPR Institute and the Suicide Prevention Lifeline, and we decided that we could take a similar approach.”

The QPR Institute is a national organization dedicated to saving lives and reducing suicidal behaviors by providing suicide prevention training. QPR stands for Question, Persuade, Refer. Much like CPR, the QPR moniker is designed to help people learn how to recognize the warning signs of a suicide crisis and how to Question, Persuade, and Refer someone for help.

The National Lifeline number is 800-273-8255. The line is answered by someone within the area of the call. In our region, calls are handled by Four Rivers Behavioral Health’s Crisis Center in Mayfield.