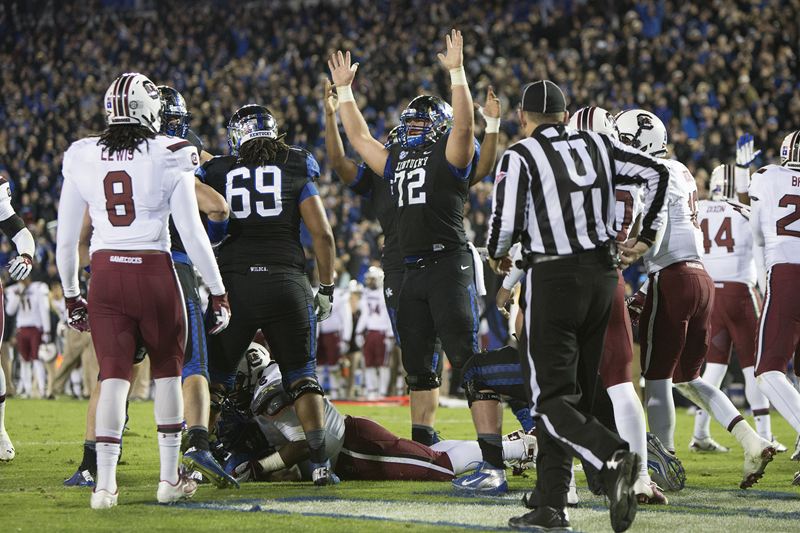 Toth Named SEC Offensive Lineman of the Week
Advertisement
By UK Athletics
Oct. 11, 2016 | LEXINGTON, KY
By UK Athletics Oct. 11, 2016 | 04:55 AM | LEXINGTON, KY
Kentucky senior center Jon Toth has been named Offensive Lineman of the Week for his performance in Saturday's 20-13 victory over Vanderbilt in Commonwealth Stadium, the Southeastern Conference announced on Monday.

Toth helped Kentucky pile up 258 rushing yards, the most in an SEC victory since 2010, and handled the line calls for an offense that did not allow a sack and averaged 5.0 yards per rushing attempt. Four different Wildcats – running backs Benny Snell Jr., Jojo Kemp and Boom Williams and quarterback Stephen Johnson – all rushed for at least 54 yards, the first time that has happened since 2012. Toth played every snap at center, leading the O-Line effort with nine knockdown blocks and 23 blocks at the point of attack.

Toth, who hails from Indianapolis, is one of four returning starters on the Wildcats' offensive line and is considered one of the top centers in college football for the second straight season. The 6-foot-5, 310-pound senior, has played in 42 career games with 41 consecutive starts. Last season, he helped UK's four-man running back rotation collect 1,855 yards. This season the Cats' running game is averaging 186.2 yards per game and has 11 total rushing touchdowns.

This is Toth's second SEC Offensive Lineman of the Week award, having been given that honor for his performance against Tennessee-Martin in 2014. He also was named to the SEC All-Freshman Team by the league's coaches in 2013.

Off the field, Toth is a three-time SEC Academic Honor Roll member and is on track to graduate in December with a degree in mechanical engineering. He is a semifinalist for the prestigious 2016 Campbell Award, honoring the nation's top scholar athlete, a nominee for the National Football Foundation's Scholar-Athlete Award and also is currently on the watch lists for the Rimington Trophy, given annually to the nation's most outstanding center, the Outland Trophy, given to the nation's best interior lineman and the Reese's Senior Bowl.