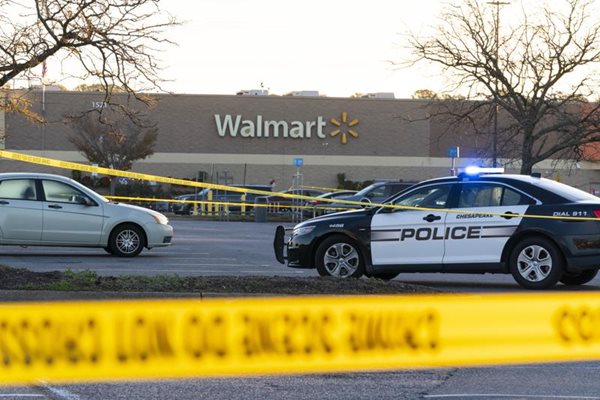 The gunman, who apparently killed himself, was dead when police found him, said Chesapeake Police Chief Mark G. Solesky said. There was no clear motive for the shooting, which also left four people in the hospital.

The store was busy just before the attack Tuesday night with people stocking up ahead of the Thanksgiving holiday, a shopper told a local TV station.

Employee Briana Tyler said that workers had gathered in the store’s break room as they typically did ahead of their shifts.

“I looked up, and my manager just opened the door and he just opened fire,” she told ABC’s “Good Morning America,” adding that “multiple people” dropped to the floor.

Solesky confirmed the shooter, who used a pistol, was a Walmart employee but did not give his name because his family has not been notified. He couldn’t confirm whether the victims were all employees.

A 911 call came in just after 10 p.m. The store was open at the time, but Solesky didn’t know how many shoppers were inside or whether the gunman was working.

Law enforcement work the scene of a mass shooting at a Walmart, Wednesday, Nov. 23, 2022, in Chesapeake, Va. The store was busy just before the shooting Tuesday night with people stocking up ahead of the Thanksgiving holiday. (AP Photo/Alex Brandon)
ADVERTISEMENT
Advertisement
Latest State & National
State & National