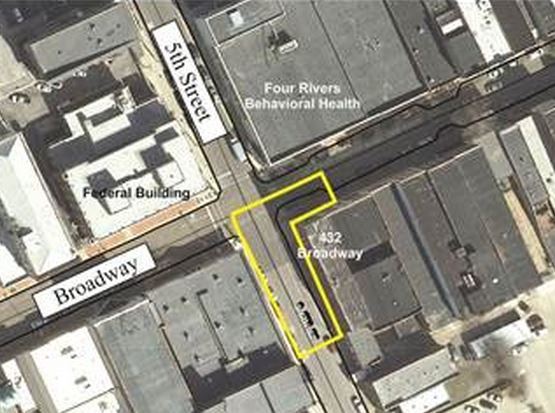 The Department for Local Government notified Mayor Gayle Kaler that the City will receive Community Development Block Grant funds in the amount of $500,000 for the 432 Broadway Demolition Project. In July 2015, the City of Paducah purchased the condemned building at 432 Broadway for $1 from a limited liability company. The building’s owner indicated that he did not have the financial means to stabilize the building or bring it up to code. The City had been working with the building’s owner since 2010 on corrective measures. Before the CDBG grant application could be submitted, the City had to own the building. The grant requires a $125,000 match from the City.

Mayor Kaler said the funds will help greatly with the project.

“When presented with challenges, we at the City of Paducah look at all avenues of recovery.  This grant award is a measure of success in our work to solve a difficult challenge.”

City Manager Jeff Pederson says, “This is not a project that the City planned for, but once we determined that the building constituted a public safety threat, many staff persons and the City Commission responded responsibly to it.  It is indeed gratifying that the City’s efforts in dealing with the building were considered worthy of award of CDBG funds in this amount.”

The City also researched the costs of demolition as compared to stabilization. Preliminary estimates to only stabilize (not rehabilitate) the building were between $1.9 and $2.0 million.  Demolition cost estimates were significantly lower, ranging from $432,000 to $657,000.

Due to safety concerns, the City moved forward in July with securing a demolition contractor. Environmental Abatement, Inc. has been working with the City on temporary and permanent shoring measures so that the building can be safely demolished without posing a threat to the roadway or the adjacent building. Officials estimate that the demolition project should be completed by the end of February.
ADVERTISEMENT
Advertisement
Latest McCracken County
McCracken County