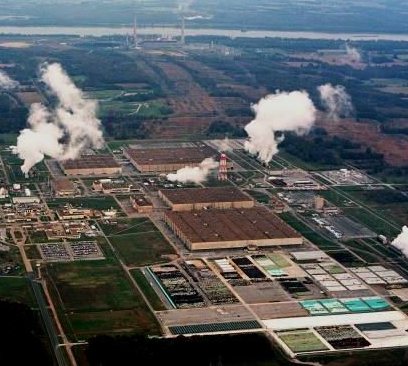 Neighbors for an Ohio Valley Alternative, a local advocacy group, has organized a petition demanding the responsible cleanup of the site.

In its recently organized Petition to End Mismanagement of Former Nuclear Sites, NOVA alleges gross misconduct on the part of the US Department of Energy.

"The distressed communities of Piketon, Ohio and Paducah, Kentucky, home to closed uranium enrichment plants and Superfund toxic waste dumps, face a crisis of nuclear cleanup, grotesquely mismanaged by the U.S. Department of Energy (DOE) and its contractors." said NOVA.

The group goes on to paint a scathing picture of what appears to be a pattern of total disregard for the law on the part of the DOE.

"Billions of taxpayer dollars have been wasted, with whistleblowers suppressed, criminal acts unprosecuted, conflicts of interest tolerated, job opportunities lost, corruption encouraged, and the "national security" apparatus abused." decries NOVA in the petition. They also warn of future plans to go ahead with a planned "gigantic" nuclear waste dump with complete disregard for community opposition. "These sites were improperly used for waste storage in the past. Gigantic new radioactive waste landfills are planned against community opposition, and fake "citizen advisory boards" and "community reuse organizations" represent the interests of corporate contractors, not our communities." said NOVA.

At a joint meeting of the McCracken County Fiscal Court and Paducah City Commission Monday night, officials met to discuss future plans for the plant site, as well as concerns regarding cleanup.

The bodies passed a joint resolution at the meeting to use all available resources to pressure the DOE into taking charge of clean-up and redevelopment efforts at the plant. Judge-Executive Van Newberry said representatives from both elected bodies, the Paducah Area Chamber of Commerce and the United Steelworkers Local 550 in Paducah will all sign off on the measure.

The resolution's purpose is to help illustrate to Kentucky’s representatives in Washington and Frankfort that the community will not sit idly by and let the DOE walk away from its responsibilities.

"I feel personally as a taxpayer that the DOE needs to clean this plant up," said Chancellor. He went on to say that he expects the DOE to fund the cleanup for the site, act on the Expressions of Interest the DOE has received and allow the community to have a place in the decision-making with transparency in the process." said Chancellor.

"The Department of Energy owes it to everyone in the community to clean up this site properly." said USW Local 550 President Donna Steele.

Paducah Mayor Gayle Kaler expressed concern for plant workers, and the future of jobs at the site.

"Taking care of those workers is our main focus," Kaler said. She went on to say that over the past few weeks a group, the Citizens Action Committee, has been meeting each Monday to discuss strategies for the plant site.

"The community is united in trying to preserve these jobs," Martin said. "It's important for us to keep the pressure up."

Several leaders are meeting with legislators and the Department of Energy in Washington on July 10 to discuss the future of the plant site.