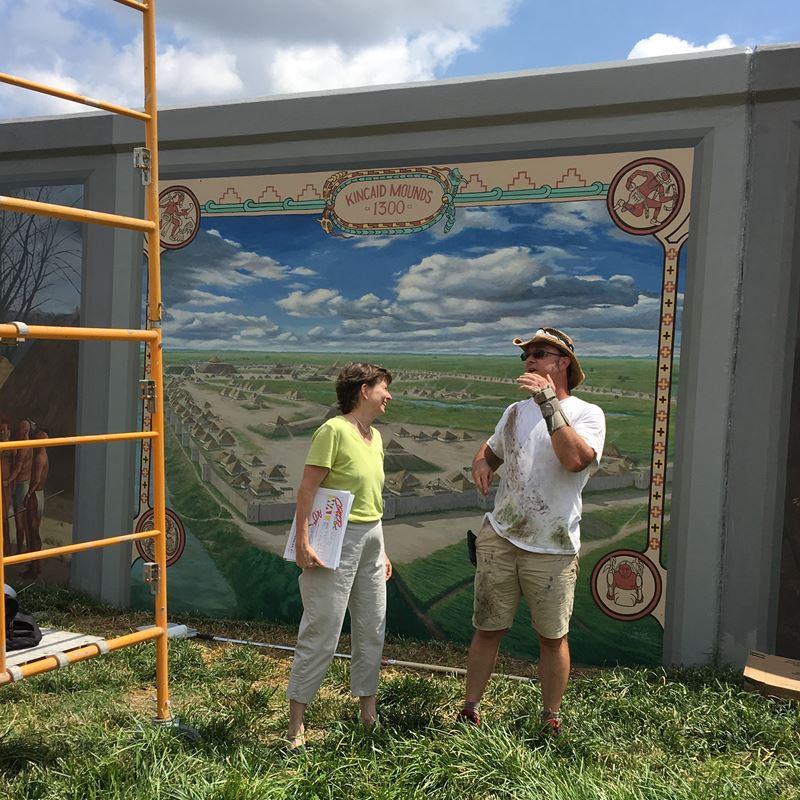 Advertisement
By Ro Morse, WestKyStar Staff
Jul. 02, 2017 | PADUCAH, KY
By Ro Morse, WestKyStar Staff Jul. 02, 2017 | 08:02 PM | PADUCAH, KY
Trying to beat the sun coming over the floodwall Sunday morning in downtown Paducah, Herb Roe was sealing the recently repainted Kincaid floodwall mural. Jane Barrow, from St. Louis stopped by to talk with the artist. It was her first visit to Paducah to see the Dafford Murals.

Barrow is a professor of art and design and head of the SIUE (Southern Illinois University at Edwardsville) painting program. She made a wise and educated observation that Roe heard for the first time in his twenty-one years painting in Paducah. She said, "I see two distinct styles of painting by two artists in these images. Did two different artists work together to create all of these images?" She was in awe of the magnificent three-blocks of art/history. Her comments were highly complimentary and spot-on.

Robert Dafford and Herb Roe, who have painted together for over two decades, do have specific styles that complement each other. Dafford trained Roe in the 1990's and early 2000's as a Dafford muralist. Roe worked with Dafford from the beginning of the Paducah project (1996), researching, designing and painting portions or all of the over 50 murals. Just like every individual is distinct, his style has evolved and his attention to detail has become a noticeable trait in the Paducah Wall to Wall Dafford Mural project. The combination of their two styles has produced a flowing masterpiece bringing Paducah's rich history to life for admirers. If you have a trained eye, you may recognize each artist's specialty.

Roe just finished repainting the Kincaid, updating with findings he's been working on with archeologists during the past ten years. Today he is working on repainting the church history mural which he painted with Dafford 19 years ago. Dafford arrives this week to paint with Roe as they finish this season's maintenance.

A clear sealer has been applied to nine of the panels to give them an extra five or so years before they need repainting. Original creations generally last from 10 to 15 years before needing a repaint. The church mural made it 19 years. A grant of $1000 from the Community Foundation of West Kentucky funded a portion of the clear coating. Dafford and Roe created and now maintain the copyrighted images along the three-blocks of floodwall in downtown Paducah. The City of Paducah funds a large portion of the yearly maintenance of this magnificent 24/7 public art-history attraction.

Paducah Wall to Wall, Inc.,a group of all-volunteers, continues to coordinate the project and has since 1996.