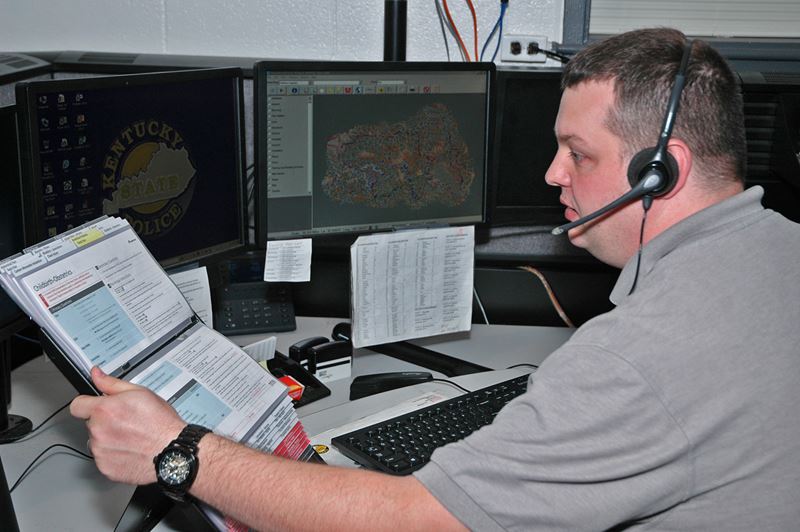 Advertisement
By West Kentucky Star Staff
Apr. 10, 2017 | FRANKFORT, KY
By West Kentucky Star Staff Apr. 10, 2017 | 06:59 PM | FRANKFORT, KY
National Public Safety Telecommunicators Week is this week, a time to recognize the efforts of more than 200,000 police and emergency service dispatchers throughout the U.S. The Kentucky State Police employs 190 telecommunicators at its 16 posts throughout the state. In 2016, they handled 554,282 calls. The following story from KSP is about one of those calls.

'It was about 4:30 in the morning and calls had died down," remembers Scott Hall, who was on duty in the radio room at Post 9 in Pikeville. "A 911 call came in and I answered it to hear a frantic male subject who was obviously distressed. He told me that he thought his girlfriend's water had just broke."

That's when Hall started to get a little nervous. He had never dealt with a childbirth call before. Instantly, his training kicked in and he began to access his childbirth procedure references.

"I asked him how far along she was and he explained that they didn't even know she was pregnant," Hall recalls. He quickly put the caller on hold, directed an ambulance their way, took a deep breath and returned to the line.

"I asked him if he could see any part of the baby and he said, 'Yeah, I believe I see the head.'"

With the couple starting to panic on the other end of the line, things started to escalate quickly during the next 45 minutes.

"Childbirth is not a call we get every day and since it was my first time, it was probably the most nervous I've ever been on a phone call," says Hall. "I was sweating bullets."

Fortunately, Hall followed his training, kept his cool and went through all the normal child birthing steps.

"At some point the couple's neighbor came over to help," says Hall. "I was so thankful for that because she had a level head and wasn't panicking as I walked them through the steps of the baby being born."

Luckily, there were no complications. "Hearing that baby cry on the other end of the phone was wonderful," he says.

Looking back, Hall says the hardest part of the call was that it was his first childbirth situation. 'It was nerve-wracking because you can't show the caller any type of nervousness. You have to be confident of everything you say to make it easier for them," he says.

Despite the challenge, Hall says it was definitely a rewarding experience. "It was one of the best calls I have taken because it was the most positive call I've had," he notes.

"As a telecommunicator, part of the job is often dealing with death," Hall explains. "It's not always a happy ending. Having to notify the coroner is not uncommon."

"We deal with a lot of bad, so in this instance, it was nice to have good happen," he adds.

"The job has its up and downs," observes Hall. "We deal with people at some of the worst and most stressful times of their lives. They need to talk with someone who will be patient, listen to their needs, treat them like human beings and get them help. That can be a very rewarding job."

To watch a short video about this story, click on the following link: https://www.youtube.com/watch?v=XxU2Qlw75Wk